My back aches as I finally sit down on the train to head back home. My ears are still ringing, my nose still tinged with the lingering scent of petrol fumes. I wipe the specks of exhaust from my cheeks and smile at the black marks smudged across my fingers. All signs point to another successful trip to the Festival of Speed.

This was only my fourth trip to the event – and the third in recent memory – but it was just as joyous an occasion as always. As I am wont to do, I spend most of my time on the far side of the track where the racing cars can be found. The selection of new road cars is immense and a real treat, don’t get me wrong. But as someone who doesn’t hold a license, let alone own a car of her own, they don’t hold quite the same appeal.

Crossing the bridge to be greeted by the likes of McLaren Orange and Martini Racing stripes; that’s where I feel more at home. The collection of cars is always incredible. From Formula 1 to IndyCar, World Endurance to Formula E, almost everything is represented. And speaking of Formula E, this was the first visit of mine where FE cars have made an appearance and it was great to see them included. I hope they become a more inclusive part as the years go on and the series grows.

I’m always drawn to the cars of the 60’s and 70’s, that being the era which first got me invested in motorsport. The bright blue of the Tyrrells always arrest my attention before anything else. Then the scarlet Ferraris once piloted by the likes of Niki Lauda and Gilles Villeneuve. Next, the distinctive orange of the Can-Am McLaren, like a beacon in amongst the whites and blues and blacks surrounding it.

Exploring a little further, you reach the current teams. The #2 Porsche still covered in grime from its victory at Le Mans weeks prior. The sleek Mahindra nestled in with the Formula 1 cars, catching the curious eyes of visitors more used to fuel-guzzling machinery. Young children being offered opportunities to get up close and personal with the Mercedes F1 car. Mechanics demonstrating what all the buttons on the complicated steering wheels do. It’s immersion and interest and appreciation everywhere you look.

And one of my favourite things about Festival of Speed? It’s not just us. It’s not just the paying fans who are interested and excited by all the treats around us. The teams are just as keen to share but also just as excited to indulge themselves.

Team members strolling through the paddocks, examining the pre-war cars with a mechanic’s eye. A couple of Ferrari personnel jogged over to the assembly area when the Williams cars had all been lined up and prepped for presentation. There’s something so gratifying and wonderful about seeing these people still be so excited by old cars, by new cars, by the history and spectacle of everything FoS encapsulates. It reminds you that all of these team members started as fans just like us. That they still are. 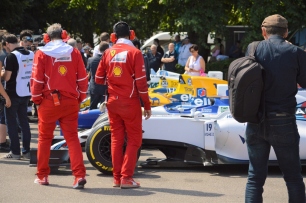 It’s the same for the drivers.

I’ve never had grandstand seats at Goodwood. Instead, I like to stand by the assembly area and watch the cars and drivers get ready to go out. It’s such a rare treat to see so many drivers of all eras and disciplines come together. The old guard reunited with their chariots. Contemporary drivers getting the opportunity to drive the classics they grew up admiring. Retirees being able to get back out there and go flat out, enjoying the rush that’s so rare these days.

I can’t quite put into words the emotions of seeing Jackie Stewart, wearing his signature helmet, sitting in his 1969 Matra MS80, waiting to go out on the track. The roar of V8 engines coming to life all around, billowing exhaust smoke into the air and into my face. It’s like a little bit of time travel. For the briefest of moments, I could imagine I was back in one of the golden ages of motorsport, watching these legends get ready to go out and make history. And that’s a little bit of magic that I feel only Festival of Speed can offer.

At it’s core, it’s a celebration of cars and machinery, of innovation and history. But at it’s heart, it’s a celebration of that feeling. That giddiness we all get as the cars rev their engines. The nostalgia of seeing cars we grew up watching. The thrill of seeing them in the hands of those who once mastered them. Everyone is united in their love of all things motorised.

And that’s why it’s not a convention. It’s not a display or an exhibition.