Read more about the WIPMarathon here.
Other Check-In posts can be found here.

Oh the meandering. I’m at that point where I really don’t feel like I’m advancing anywhere. I’m just letting my characters have a chat and getting to know their backstory which is fun but it’s going to mean so much editing later on because so much of it will have to go.

What I learnt this week in writing:

Don’t get distracted with “correct procedure” during a first draft. Grammar, adverbs, even plot holes…none of this can matter to me right now, otherwise I will never finish.

And I also learnt that I work much better with a reward system. Namely stickers. Here is my newly formed reward calendar: 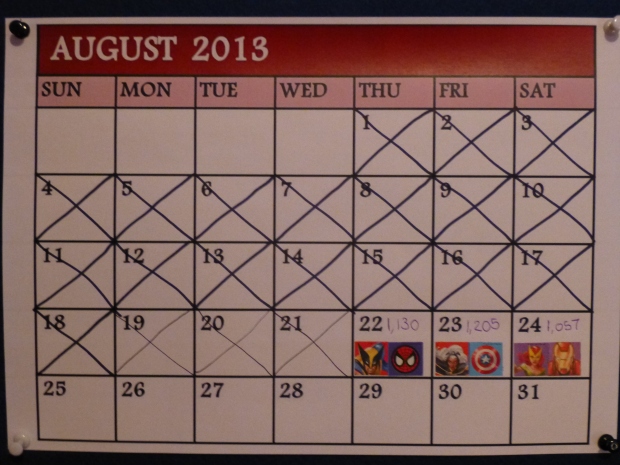 What distracted me this week while writing:

Lego City once more but I finally hit 100% so that’s no longer an issue! I also met Neil Gaiman with fellow wipmarathon-er Laura on Sunday which was great. He had a road named after his latest book in my home town and there was an unveiling ceremony and then he did a talk, reading and signing in the evening. It was a long day and, being a very unsociable type of person, it took quite a bit of recovering for me but was totally worth it. 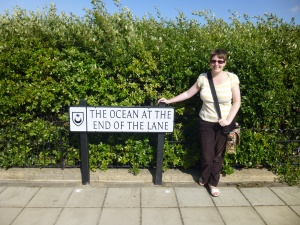 I’m going to be completely honest and say that I am really not happy with anything I have written in the last couple of days so I really didn’t want to post anything. BUT I know that many others have felt the same way and sucked it up so I present you this in all its unedited glory…

“Meaning we are dealing with forces greater than our capabilities and understanding. With things that ought not to be messed with. Your Steven has stumbled upon something somehow, something regarding the Trifect and to find the records you must seek, go North unto a trail so bleak. Beware the one who swore the pledge and lose two more beneath the edge.”

I stiffened, the jarring rhyme ringing in my ears, so unnatural in Carina’s voice, when I knew the words belonged to another. Paige knew it too, her hand instinctively going to the card she still had in her pocket. Steven’s card.

I was already looking for the exit when Carina laughed, not the musical laugh from before but something cold and mocking. “Sweet little Emily. Still playing explorer, I see. Well, good. You found the bookish fellow it seems but he made the mistake of sending you on this little detour. How unfortunate for him, I’m afraid he won’t be making it to your little rendezvous-”

She was cut off when Marlaya smacked her in the side of the head with a wrench. I stared wide-eyed between the two of them, Marlaya fuming and Carina nursing a cut on the side of her head, shocked into silence. “It’s not her!” I hissed, “it’s Steven talking through her. Somehow.”