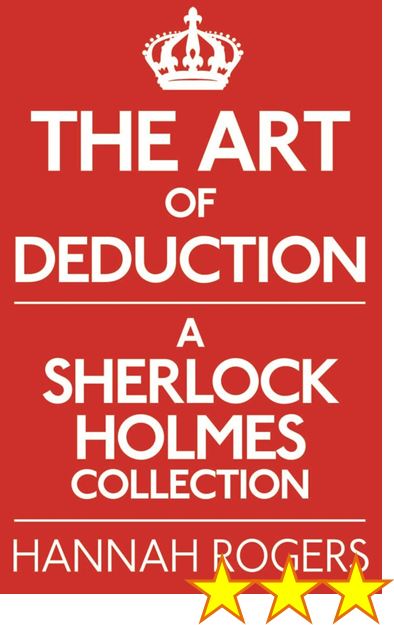 So, here is the book that I appear in (page 162-163, if you’re lookin’!) and I received it in the post yesterday and read it straight through in one go. It’s getting good ratings on Amazon and Goodreads which I am pleased about because of the cause but I find that people aren’t really saying a whole lot about the content, instead focusing on it as a whole so here is my – possibly not very popular – opinion on the whole book.

This book has been around a year in the making and it’s finally here! Unfortunately, I found it to be a little lacklustre. There may be several personal reasons for this that won’t effect other people’s opinions (that I saw it’s progress from early on, that I am more a Victorian Holmes fan than BBC etc.) so please bear that in mind when reading this. And I don’t want this review to seem like I am dumping on the book, I am not even remotely doing that because it is for a good cause and something I care strongly about.The overall look of the book is nice and striking and it leads in with a great, insightful intro from one of the Baker Street Babes (a group of ladies who do a podcast and much more for the Holmes community). It then goes into the main creative content that is split into five chapters: The Diogenes Club (which also includes anything to do with Scotland Yard), We Believe in Sherlock Holmes, The Game is Afoot, Beneath the Hat & Poetry.

Within these (save poetry which is simply…poetry) we have written pieces followed by a ‘gallery’ of art. I can’t draw for cookies (and I’d do anything for cookies!) so all of the art is impressive to me but if you are buying this book more for the art than the fiction then I strongly suggest the Kindle version over the hardcopy. This way, you get all the pictures in colour and at a decent resolution to be properly admired. Some of the darker pieces have not translated well into print and they look like very poor scans which is highly unfortunate for the artist. But at least you can truly appreciate their work in Kindle format.

There are some great pieces of fiction in this book, some of the highlights for me being: Acquiring a Consulting Detective, Pirates & Spies, A Quiet Birthday, Zero at the Bone, A Study in Fiction, Linear Regression, I Dream of It Every Night, Amicae Antiquae & Sestina for a Last Lesson to name but…well, quite a few it seems!

There are, however, a lot of errors throughout the book that take away from the quality, I feel. I know there was a deadline in submissions so some people maybe rushed their work and didn’t check it but I think the person accepting the submissions or the editor should have pointed this out to the author so corrections could have been made. I wouldn’t want my work being published with obvious errors in it, I’d want to be told so I could correct it. And some of the formatting was messed up too, with some works being justified, others not, sentences cutting off to another paragraph halfway through. It comes across as a bit amateurish, if I’m honest.

My other gripe is that the book leans very heavily to BBC’s Sherlock. I love the BBC show, don’t get me wrong, but I also love the Canon, the Warner Bros. movies, the Russian series, Granada…and these all felt very poorly represented. I don’t know if this was because the publishers felt BBC content would be easier to sell or what but it’s a bit of a disappointment, knowing that there were plenty of submissions to cover the other adaptations. When it was originally arranged, there were at least two more chapters (1895 & The Spider’s Web, which revolved around the villains of the Holmes canon) which would have allowed for more varied content and these seem to have vanished all together which is a huge shame. But there is a whole chapter dedicated to the ‘We Believe in Sherlock Holmes’ movement that was strictly BBC related and allowed for no fluidity of incorporating other versions. And then there’s the fact that one person has no less that 16 pieces in this book, it doesn’t allow them to say that they didn’t have room for more. They could have limited it to one submission each to allow for more people to take part.

The last thing I want to do is put people off purchasing the book because there are some great pieces in here and it is for two good causes (raising awareness for Undershaw and royalties going to Help for Heroes) but I also wanted to put this honest opinion out there. I just feel it was a book with a lot of potential that was eventual not met after all the waiting.