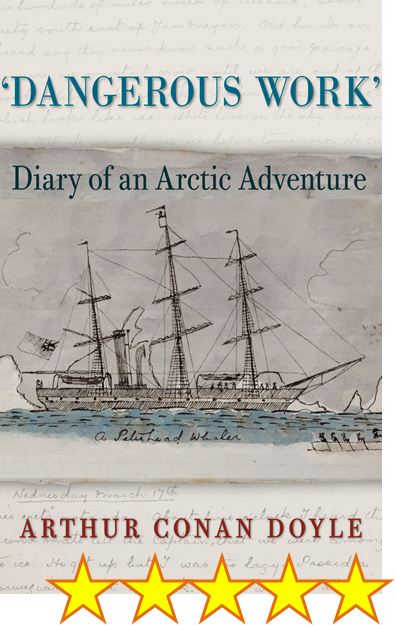 An absolutely fabulous book. If you are in any way an Arthur Conan Doyle fan then I cannot recommend this book enough. It is one of his earliest works, presumably never intended for publishing seeing as he had ample opportunity to do so himself, and yet it still retains the fun and tight narrative that he employed in his fiction later on.

The book revolves around his 6/7 month journey through the Arctic on a whaling expedition to bring oil, blubber and bone back to sell. Naturally, there are some graphic depictions of events throughout so if you are especially sensitive to animal cruelty then maybe this isn’t the book to read. It does help to remember that this was in a completely different era and that it wasn’t for sport but for keeping people in work and able to survive. Arthur himself does say numerous times throughout what a shame it is to have to make the ‘poor brutes’ suffer.

He maintained an official log for the SS Hope but what we have here is his own personal recollections of the entire journey with no day missed, despite how dismal and uneventful some days were. So while we are given the statistics on longitude and latitude, the wind direction, the haul of the day and specific events, we also get an insight into a 20 year old Doyle and how the whole experience shaped him.

Some of the highlights for me were:

– His recounting of a tale from their Captain of how he almost lost his life in London many years back.
– His description of one of the crew of the ship; a ‘handsome outlaw’ that would stalk around the ship mysteriously and rarely say a word to anyone but had a vicious temper on him. The vivid description was worthy of a piece of fiction and you almost wanted him to be a main character in another Arctic story.
– Arthur’s description of a dream he had that is just dripping with anxiety. Anyone that has ever had a dream about missing out on an exam will be able to empathise completely.
– His attachment to a sea snail – ‘John Thomas’ – that he catches from the Arctic depths.

It’s a great account of whaling and Arctic travel in the late 1800’s as well as seeing Arthur’s early encounters in his medical capacity.

On a more broad view, the book is beautifully put together. It is a nice coffee table size, not exactly made for portability but it can be done. It has a dust jacket and a blank cover underneath. There is an introduction describing how the journey came about and the general impact it had on Arthur’s life before going into the actual content. It is split into three journals and they are all presented as facsimiles of the actual journals themselves. For a medico in training, Arthur has surprisingly neat handwriting that isn’t too difficult to read once you get used to the repetition of certain words and his style of writing. But for ease of reading, the whole journal has been annotated in the second part along with numerous footnotes to elaborate on certain points with explanation or further source background. It also includes two letters that he sent home to his mum during the timescale.

After the journal and annotation, there is a section about how the Arctic moulded Arthur afterwards and how it would show up in his works and his life. They also include two articles that he wrote about the Arctic and two pieces of fiction – The Captain and the “Pole Star” and the Holmes story The Adventure of Black Peter – to demonstrate how the experience would find its way into his later works.

Overall, it is a fantastic addition to the Arthur Conan Doyle collection and a real gem for insight into this fascinating man. There is the question of whether he would have wanted it published as he obviously never did so himself but I think it is a positive reflection on his wild, humorous and jovial personality. A definite must read.