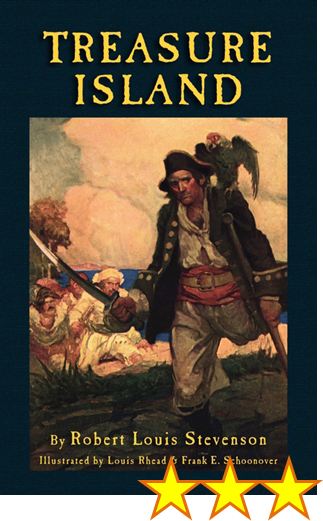 Only a short review this time round:

Everyone knows the characters and the story but I must admit it wasn’t quite what I had expected. I liked the story well enough and enjoyed reading about the characters but I think the style of writing threw me for a curve more often than I was comfortable with. Stevenson uses a lot of technical nautical terminology which is all well and good being what it is, but it meant that I would often get lost throughout his long descriptions of action scenes or setting descriptions because I just had no grasp of the content. Because of this, I did find myself skimming paragraphs every now and again.

The dialogue proved to be much the same but I am more forgiving of that because without the piratical jargon and strange mis-proununciation it would have seemed jarring, despite sometimes struggling with what was actually being discussed.

I have never seen an adaptation of Treasure Island (save for Muppets and the brief snippet in The Pagemaster) so I didn’t know the ins and outs of the plot but it was fairly predictable in its sudden climax.

But despite the negative comments, I did enjoy it. I liked the adventure, the peril, ol’ Long John himself…There certainly needs to be more books focusing on pirating. I can understand that this was popular because of its originality at the time but I suspect there are more recent books that do it better, however blasphemous that may be! For what is often hailed as a childrens book, it is quite violent and hard going to read so maybe if they like pirates, stick with Gideon Defoe.